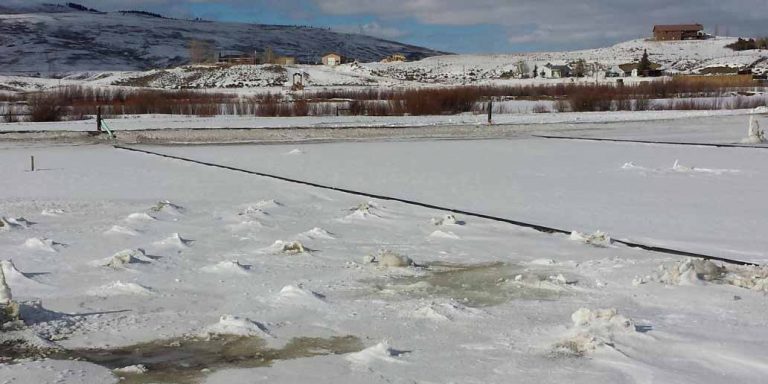 What will you do when your lagoon receives lower ammonia discharge limits? Are you looking for an ammonia removal solution for your lagoon, especially during wintertime?

Kremmling, Colorado is a small community in Grand County with 1,500 connections in the northwestern part of the state. Their wastewater is treated by an aerated lagoon system operated by Kremmling Sanitation District (KSD).

The facility discharges to Muddy Creek after a tertiary filtration and disinfection.

The Colorado Department of Public Health and Environment (CDPHE) issued the KSD effluent ammonia limits in 2011 as a part of the District’s wastewater treatment plant discharge permit renewal.

Frustrated by the new discharge permit, KSD turned to RG and Associates for a solution. Nick Marcotte, P.E. of RG and Associates who oversees this project, helped the District explore three possible operations:

Following years of tests and data collection from the pilot test in KSD’s lagoon, it was proved that the Bio-Dome® system removes ammonia in wastewater under near-freezing temperature.

It is estimated that an additional 480 Bio-Dome® units will be needed to allow KSD to have a maximum discharge of 5 mg/L ammonia with a flowrate of 0.30 MGD at a total Bio-Dome® system cost around $1,300,000. This cost is significantly less than the other two alternatives.

The Bio-Dome® technology obtained approval from CDPHE last year. All of these allow KSD to include Bio-Dome in their system to continue to operate for the foreseeable future.

Bio-Dome® is featured in “Principles of Design and Operations of Wastewater Treatment Pond Systems for Plant Operators, Engineers, and Managers” (EPA/600/R-11/088).

For more on how a Bio-Dome® solution can keep your lagoons compliant at a cost you can afford,