After meeting Taylor Reynolds of WCS at the Illinois WATERCON 2013 conference and learning of the Bio-Domes ability to help communities reduce their TSS levels due to algal growth, Tim Bronn requested a proposal from WCS for Medaryville, IN. Medaryville is currently trying to identify a cost effective solution to their excessive algal blooms that will allow them to maintain year round compliance with their NPDES permit. Upon receipt of the budgetary proposal, and viewing the Bio-Domes as the most cost effective solution that would also be very easy to implement, Medaryville requested a mobile pilot unit to run an onsite test during the summer 2013 season.

The pilot unit was delivered on July 11th, 2013 and was operated until September 16th, 2013. During that time, samples were collected at least once / week, with a few weeks having multiple samples collected. The pilot began with a 4 day HRT which was extended to a 7 day HRT on Augusts 13th, 2013. The gray line on the chart below indicates when the HRT change was made. While the pilot unit was able to show the Bio-Domes capable of ensuring Medaryville meets their limits at a 4 day HRT, the data obtained under the 7 day HRT shows the ability to greatly exceed their permit limits. 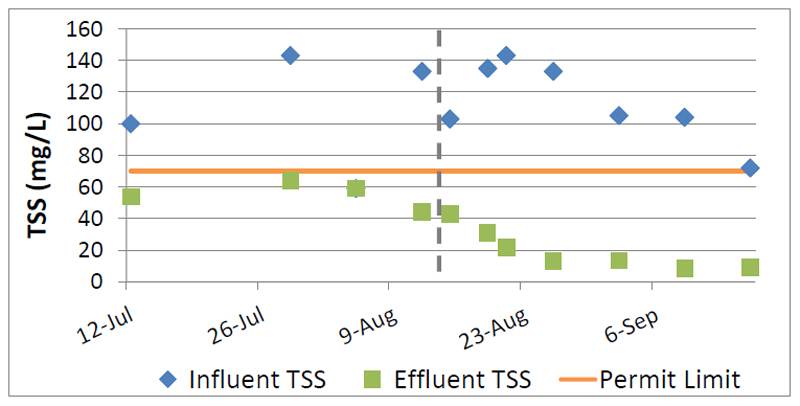 Everyone involved in the pilot study is extremely enthusiastic about the results obtained and Medaryville is moving forward with a full scale installation.