Plain City experienced tremendous growth over the last decade, and the 300,000 gallons/day wastewater flow was beginning to exceed permitted levels of 30mg/L for BOD in a 6 cell, 36 acre lagoon system. After receiving a proposal for an $8M mechanical plant, Plain City investigated competitive alternatives.

In 2008, WCS proposed that 50 Bio-Domes be placed in an “alley” utilizing a hanging curtain to ensure that all water flowed past the units as a polishing step in a secondary pond. The proposal was accepted and the entire installation, including the curtain, cost less than $150k. 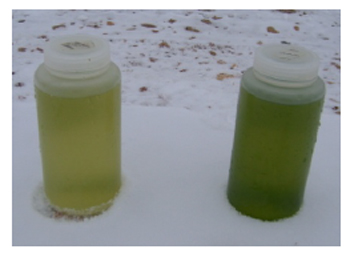 Once the 50 Bio-Domes were installed, Plain City was able to achieve BOD compliance using just 3 of their 6 ponds, which provided significant additional capacity for future growth. The chart above illustrates the relative removal rates for BOD between the poo-gloo zone and the normal facultative lagoons. Additionally, Plain City has seen a significant decrease in their TSS levels as a result of the Bio-Domes ability to disrupt algae blooms. The image to the right illustrates this.

The community is happy with their system, particularly the fact that they’ve been able to shut down 3 of the 6 lagoons and still remain in regulatory compliance.