During 2009-10, WCS investigated various air cycling regimes for Bio-Domes in a test tank located at Central Valley Water Reclamation Facility (CVWRF) in Salt Lake City to optimize conditions for maximum phosphorus uptake and release. Results from CVWRF pilot test tank show a removal of about 2 mg/L, indicating the possibility of better P removal in lagoons with refined operational techniques (water flow and air cycle management). The CVWRF test was conducted with the equivalent surface area of one Bio-Dome at a hydraulic retention time (HRT) of 8 days.

WCS proposed a scaled implementation at Wellsville starting with 35 Bio-Domes for initial research purposes. After the 35 units were installed in late 2009, field data indicate the Bio-Domes were removing about 0.25 mg/L of P from the water prior to discharge. Wellsville decided to increase the number of domes from 35 to 75 and installed the additional 40 in June, 2011. The chart below shows the effluent concentrations taken quarterly from 2007 to the end of 2011. 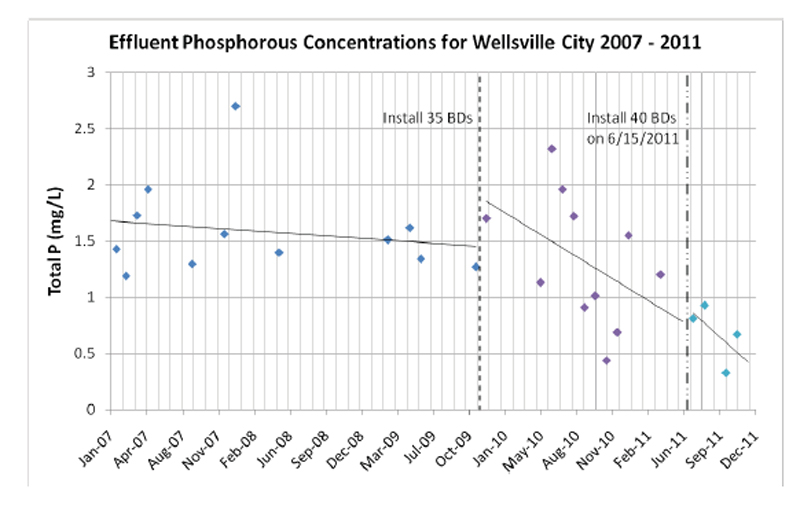 Don Hartle is extremely pleased with the improved discharge levels and worked closely with WCS to expand the installation in 2011. You can see a video of the expansion at: